Susquehanna Signal interviewed Kevin, he talks about the film, and his life in the Susquehanna Valley

For those that don’t know, the Sundance Film Festival is an event that takes place annually in Park City, Utah. The Festival is a showcase for new work from American and International Independent Filmmakers. Many movies are submitted, but few make it as far as Kevins.

‘Mike Wallace Is Here‘ is currently nominated for a Grand Jury Prize, according to sources.

Thanks for doing this interview Kevin, for those that don’t know you from the area, can you tell us a little about yourself?

I was born in Germany and lived there until I was ten years old. After the farm my dad worked on near Munich had to close down, our family moved to Brogue, PA and I started 4th grade at the now-defunct Chanceford Elementary School. I continued in the Red Lion Area School District and graduated from the high school in 2011. I would often hang out with my friends Brady Poteet and Will Kottcamp, making silly videos with mini-DVD camcorders right when YouTube was getting started. It was a lot of tinkering and problem solving getting these clips off the discs, into an editing program and up on our site for others to watch.

You were at Sundance Film festival for the movie ‘Mike Wallace Is Here’ can you tell us a little of the role you played in the making of this film?

I was hired in March of 2018 as the lead assistant editor on the documentary. At the beginning, my main role was ingesting massive dumps of footage from both Mike Wallace’s Estate Collection and the CBS News Archives so that my director, Avi Belkin, and my editor, Billy McMillin, could start reviewing it and begin structuring the story. Mike’s career spans from the early radio days before the Second World War and continued well into the 2000s so it was a massive undertaking in deciding what stays and what doesn’t. Footage kept rolling in from other sources (we ended up with 698 total hours, taking up 27 Terabytes on our server) until we locked picture in December. One of the monster tasks of this project was taking new HD film transfers of 60 Minutes outtakes and syncing them with the audio rolls. Back in the 70s and 80s, CBS News’ flagship magazine program shot on 16mm film, spliced out the portions they wanted to use in the aircut and then re-assembled the cutting room floor into “Outs” (or Outtakes) reels. The audio remained continuous but it was quite time-consuming to sync the video up to it. Due to the small size of our team, Avi and Billy eventually trusted me with stringing out assemblies of chapters and even editing some rough cuts of scenes before they would come back to Billy’s bay for finessing. I think my creative involvement led the producers to finalize my credit on the film as Associate Editor.

So, Who was Mike Wallace?   And was it difficult to work on this film based on Mike Wallace’s emotional history?

Mike Wallace, simply put, was a force of nature. He was a hard-nosed interviewer that pioneered his interrogative style in the 1950s on a local TV show in New York called Night Beat and then continued to be a “grand inquisitor” when 60 Minutes launched in 1968, working extremely hard for many decades and basically refusing to retire as he approached his 90s. The film not only highlights his career but tells the lesser-known stories of his personal troubles, including losing his 19-year-old son Peter (brother of Fox News Sunday host Chris Wallace) in a fatal mountain climbing accident and suffering several bouts of depression. The most difficult in this all-archival film was finding moments in interviews with Mike (we pulled from 91 total conversations) where he went off-script and appeared more vulnerable. Through interviews that he conducts with Barbra Streisand, Kirk Douglas, and Lillian Roth, we also abstractly show the facade he puts up.

Do you think your childhood/education in the Susquehanna Valley played a roll in your involvement in this film? Were there any teachers or classes you still remember?

I definitely believe that my education at Red Lion contributed positively in getting me to this point in my career. Even before studying Film and TV Production at Temple University in Philadelphia, it was the caring teachers at Red Lion that encouraged me to make videos and pursue my dreams. David DePrator and Heather Fogell allowed me to work in the TV Studio and play my bake sale videos and football highlights during the morning announcements. Ronda Vasellas, Misty Wilson, JD Granger and Jan Grim were equally supportive, with the latter two often appearing in my videos themselves. Even though I learned most things about filming and editing by just doing them, Red Lion provided an amazing environment to make it all happen.

How can people watch your movie?

MIKE WALLACE IS HERE will be in the festival circuit for the next few months and then hopefully receive distribution for TV and/or streaming. We are also exploring a limited theatrical release but for now, stay tuned! We definitely want as many people as possible to see the documentary. Even if you don’t know who Mike Wallace is, it’s overall very timely and tells the story of how the birth and death of broadcast journalism came to be.

Is there anything you want to acknowledge? How can people keep in touch with you?

One of my favorite things is giving back and paying it forward. About halfway through the post process and then again towards the end, I brought in fellow Red Lion Area Senior High School alum John Leo O’Rourke as a Post Production Assistant. Since the film is primarily about a TV show, we had to do a lot of frame rate conversions to make everything look more cinematic and consistent, and Leo was instrumental in helping with that. He’s newer to Los Angeles than I am, but is already off to a great start.

Thanks for doing this Interview Kevin. The Susquehanna Valley wishes you the best in your endeavors!

Of course! The Valley will always hold a special place in my heart. Thank you!

Susquehanna Signal will keep in touch with Kevin, and we’ll let you know where to watch his film when it is available. 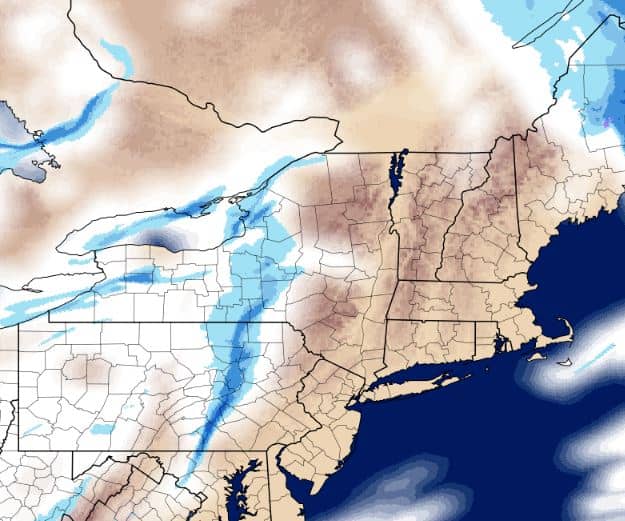 No, A Snow Squall isn’t a winter bird, it’s a quick moving snow system that can bring dangerous winter conditions, quickly. The National Weather Service in